Risoil Group, the winner of concession tender comprising assets of the state enterprise (SE) Kherson Sea Trade Port (KSTP), counts on February-March as a launching point of their management activities in the port, as reported by Risoil S.A. Director Shota Hajishvili.

“Upon the Kherson Port concession agreement signing we do not yet control it. Nowadays there are papers arranged to transfer the land and property, an as from the moment we receive it all, the management activities of the company Risoil S.A. is going to start. Hopefully it will take place in February-March 2021”, proclaimed Mr Hajishvili to the NV magazine.

Mr. Hajishvili had also had some interest in the public Stevedoring Company Olvia assets concession but following the closer consideration of tender conditions he resumed that they were “nicely put, disappointing, and resulting in no economic effect ever”.

While the well-knit Kherson port by our calculations could become a lovely hub both for the Dnipro upper reaches, and for the sea, so we had decided to bid. I’d like to point out that the contest was prepared very good. There were no pitfalls noticed during its course. And to our surprise we won. I think it’s due to our first-rate conditions offered”, he noted. 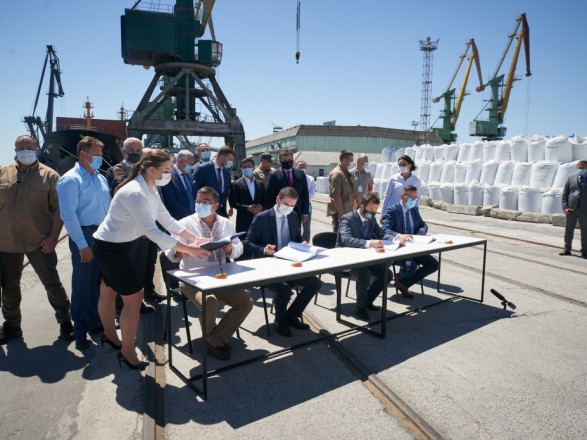 However, the development of Kherson Port urges for considerable investments prior to its starting to gain profits.

Judging by the sad state we have found the port in, we are actually getting only the land, as the most of the property is going to go scrapped. Moreover, the fleet is undocumented as well as the seamen. Plus about 30M UAH of debts and no funds to pay salaries”, the concessionaire said.

In June 2020 Ministry of Infrastructure of Ukraine and LLC Risoil-Kherson have signed the concession agreement on the integral asset complex of SE KSTP and the relevant assets of SE USPA (Ukrainian Sea Ports Authority) in the sea port of Kherson. The agreement envisages a high rate of the variable concession fee (7%), while the fixed concession payment amounts to 12M UAH, and the investment liabilities under 300M UAH. on top to the handling facilities upgrading, the company plans to acquire soon its own fleet and turn Kherson into a river hub.

LLC Risoil-Kherson is a consortium of Georgian Industrial Group and Risoil S.A. – 60 to 40% accordingly.