DHL Global Forwarding (“DHL”), the international freight specialist arm of Deutsche Post DHL Group, Ukrainian Railways, and the Center of Transport Service Liski (CTS Liski), the logistics division of Ukrainian Railways, signed a Memorandum of Understanding (MOU) to develop rail connectivity between China and Ukraine. The three companies will endeavor to create better connectivity between the two continents to facilitate trade, namely from Asia via China to Ukraine and other European markets, and from Europe via Ukraine to China and other Asian markets. 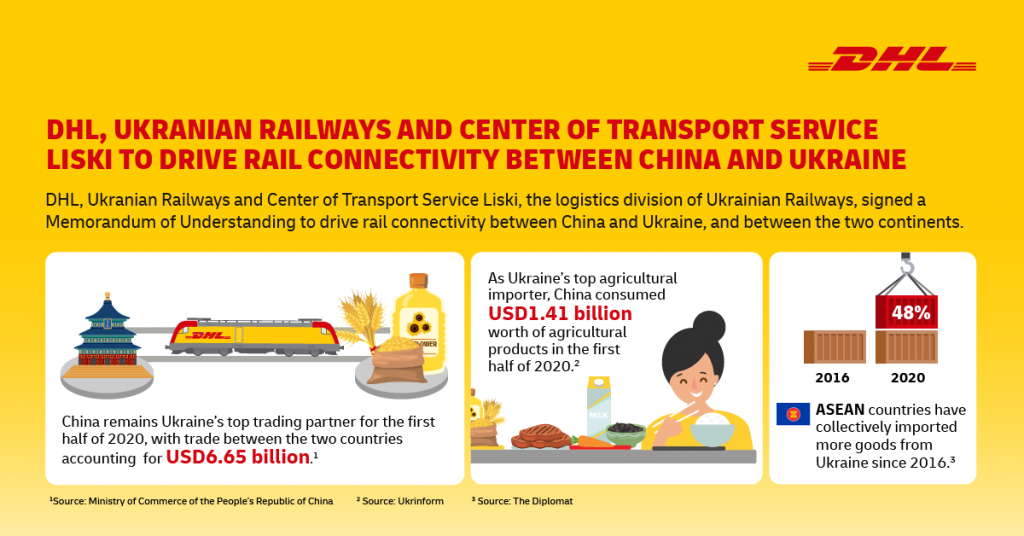 “There is a lot of excitement for those watching trade developments between China and Ukraine. Further to China’s newly-established position as Ukraine’s top trading partner, recent reports have revealed Ukraine’s plans to start negotiations on a free trade agreement with China. I am convinced that this partnership to create rail connectivity will expand trade flows between businesses in Asia and Europe when it comes into fruition and in turn, contribute toward the deepening of trade ties between the two countries,” said Steve Huang, CEO, DHL Global Forwarding Greater China.

With a population of 40 million, Ukraine is one of the largest European countries by population. The Eastern European country is strategically located at the crossroads of the Belt and Road between Russia and Turkey, with access to the Black Sea and the Sea of Azov. The enhanced rail connection would provide Asian businesses access to the Baltic States, Belarus, and the Nordic countries. Goods from neighboring countries can be consolidated in Kiev, the capital of Ukirane and sent by rail to China for onward dispatch to various Asian markets using either air or road freight. 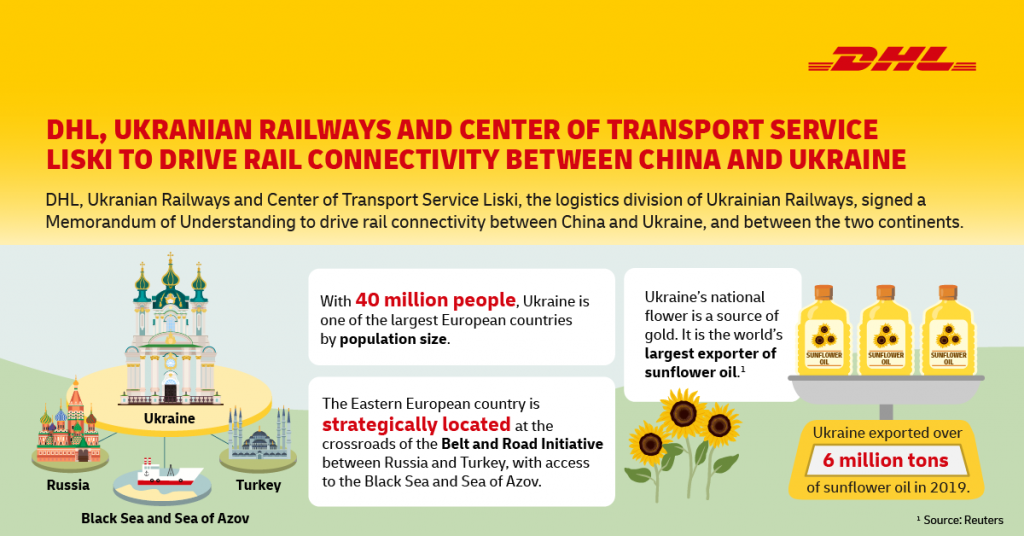 “The memorandum between Ukrainian Railways and DHL provides for the organization of container trains, the attraction of additional cargo, and the geographic expansion of transportation. In fact, this is a new level of cooperation and a completely different operating level of CTS Liski,” said Volodymyr Zhmak, Chairman of the Management Board of Ukrainian Railways.

Ukraine’s trade with Asia is on the rise. China, Ukraine’s top agricultural importer, consumed USD1.41 billion worth of agricultural products in the first half of 2020, and ASEAN countries have seen their imports of Ukrainian goods increase by 48% since 2016.

“This collaboration is the mark of a momentous milestone for the China-Ukraine rail corridor. We look forward to working with DHL and Ukrainian Railways to develop and speed up containerized rail freight between China and Europe, particularly Eastern Europe, and the inter-regional trade opportunities that this will bring businesses in Ukraine and our neighbors,” said Edvins Berzins, CEO of CTS Liski.