President of Ukraine Volodymyr Zelensky reckons upon developing and upgrading the network of Ukrainian ports in the nearest time with the assistance of Qatar which would enable the country to become an important port centre at the Black Sea coast, as reported by the head’s of state Press Office.

“We are glad that the Qatari company QTerminals is entering the concession, entering a Ukrainian port, one can even say the ports, as there is the concern in further steps — the relevant instrument is signed between our states. We are going to develop and modernise Ukrainian ports, and with such reliable partners we can become an important port centre at the Black Sea coast in our region”, declared Mr Zelensky on Monday 5 April. 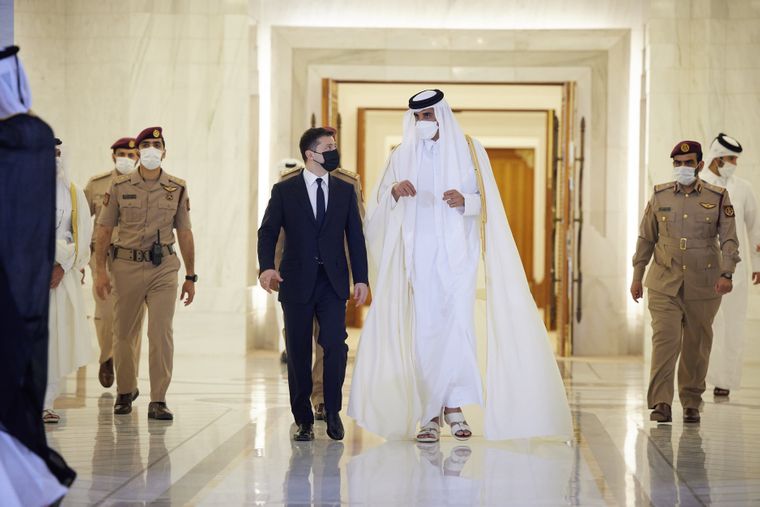 President of Ukraine has also pointed out the importance of signing the documents on recognition of Ukrainian seafarers’ certificates, and soon Ukrainian drivers’ licenses as well.

Mr Zelensky has also noted that Ukraine is very interested in deliveries of LNG through the sea terminals, as well as in Qatari experts involved in the development of the Black Sea shelf plateб a memorandum on which was signed as well.

Qatar is also interested in investing in Kyiv’s hotel infrastructure, as well as that of Kherson Region and Odessa. President Zelensky believes that Qatari side might become a partner in construction of the circle thoroughfare around Kyiv city.

“We wish to build a fundamental, large road with bridges. The estimate for this construction will be huge, and it will be hard for Ukraine to do it itself. We are going to do it anyway, but with such partners is always better”, he underlined.

On Monday 5 April President of Ukraine Volodymyr Zelensky with the spouse was in the State of Qatar with an official visit. He took negotiations with the reigning Emir Tamim bin Hamad Al Thani, and Prime Minister and Minister of the Interior Khalid bin Khalifa bin Abdul Aziz Al Thani.

As the visit’s outcome, Ministry of Infrastructure of Ukraine and Ministry of Transport and Communications of Qatar have signed MoU on the mutual recognition of seafarers’ certificates. Moreover, the agreement on assignment of an additional investment of the Qatari company QTerminals in the concession project in the port Olvia was signed. There were 13 memoranda and 2 commercial contracts signed during the visit to Qatar all in all.