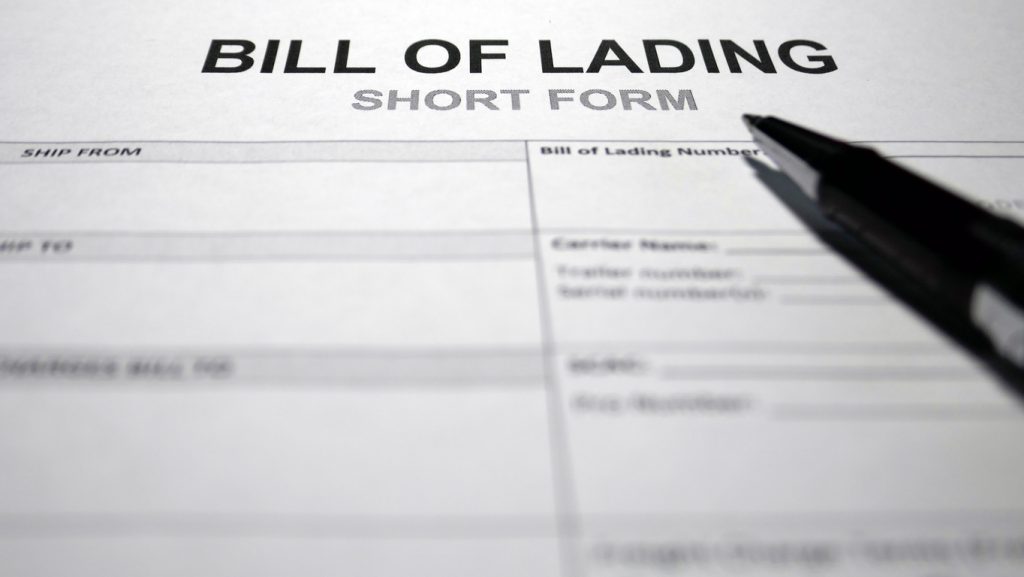 Someone filling out Bill of Lading.

Hired by buyer CAG, the defendant (the shipper) successively sent eight booking orders to the plaintiff (the carrier) and entrusted the plaintiff with shipping eight batches of goods. The two parties then communicated on booking, trailer and other matters. The defendant informed the plaintiff about when the goods were prepared, the trailer loading address, who to contact and other information.

The plaintiff then placed an order with the shipping company. The goods involved were shipped successively in January and February 2019. The ocean bill of lading stated that the shipper was the plaintiff and the consignee was NCL. According to the container circulation information, all the containers loaded with the goods involved were returned empty in February and March 2019.

During the trial, the plaintiff confirmed that for the seven batches of goods, it had mailed seven sets of original ocean bills of lading to NCL without receiving the freight, and NCL had released the goods to the consignee at the port of destination. For another batch of goods, the plaintiff still held the original ocean bill of lading. The defendant confirmed that the plaintiff had taken charge of packing, trailing and customs declaration of the goods at the loading port, and that the goods had been picked up by the consignee at the port of destination.

The plaintiff requested that the defendant pay the freight as the consignee refused to do so.

The Shanghai Maritime Court first confirmed the contractual relationship of carriage of goods by sea between the plaintiff and the defendant.

Then, the Court held that where the billing of lading had been marked “freight collect” and the consignee had picked up the goods, the plaintiff was not entitled to request that the shipper pay the freight for the following reasons.

The Court held that where the consignee becomes spontaneously involved in the carriage contract by picking up the goods from the carrier, claiming cargo damages or exercising other rights under the contracts, the consignee shall bear the contractual obligations.

Once the consignee exercises its rights under the contract spontaneously, its legal status transfers from a third party with the right to pick up the goods to the contracting party that shall undertake obligations stipulated in the bill of lading.

In the pending case, the consignee chose to pick up the goods and thus its status changed from the third party to the contracting party under the billing of lading. Therefore, it was obliged to pay the relevant freight accordingly.

The Court explained that, like the aforementioned billing of lading, the telex release bill of lading still functioned as proof of the carriage contract and receipt of goods, though it had two distinctive features.

The second feature is that the consignee could only pick up the goods with an identity certificate. This did not affect the consignee’s obligation to pay under the “freight collect” term.

In this case, for another batch of goods, even if the goods were released without a bill of lading at the port of destination, the plaintiff had to bear the risk caused by its failure to effectively control the goods, and the plaintiff could choose to claim against the actual carrier for the corresponding damages, instead of requesting the shipper to pay the freight.

Based on the above, where the consignee gets involved spontaneously in the carriage contract of goods by sea, the consignee shall bear the obligations set for it in the bill of lading, including paying the freight as per the terms in the bill of lading. Neither the telex release bill of lading nor the identity of NVOCC will affect the consignee’s obligations. As the Court stated in its reasoning, it is better for an NVOCC to carefully choose the freight collecting method, and reduce the corresponding risk by controlling the transport documents and the circulation of the goods as much as possible.

For further information on this topic please contact Jin Yu-Lai at KaiRong Law Firm by telephone (+86 21 5396 1065) or email (jinyulai@skrlf.com). The KaiRong Law Firm website can be accessed at www.skrlf.com.