“Hang on a second, this was never agreed in the contract!” is a sentence that parties may find themselves either on the sending or the receiving end of. It is meant to operate as a “killer” argument in a debate which is governed by the English Contract Law, in which the principle that the agreements must be kept prevails. Not infrequently would a question arise as to what should happen when a certain agreement does not provide for a specific occurrence. This is where the courts intervene to decide whether it is necessary to imply a term into the contract, to make it efficacious.

The purpose of this brief series of articles is to assess the obligations and potential liabilities which the charterers may be found to be burdened with, even when those are not expressly agreed in a charterparty. 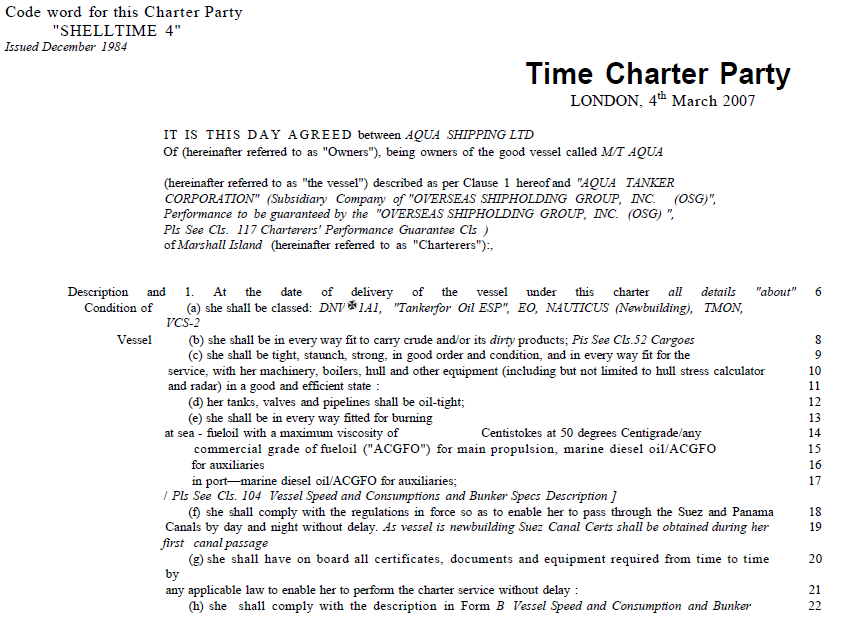 Ordinarily, there will be express provisions concerning the charterers’ obligation to employ a vessel between safe ports/berths/anchorages (absolute duty vs mere exercise of due diligence) contained both in time charters (either incorporated in standard clauses, such as at NYPE 93, Asbatime 81 or Baltime 2001 or added by the parties thereafter) as well as in voyage charters (again, either by way of standard inclusion as in the cases of Asbatankvoy or Norgrain or by addition).

The question is what happens when the contract remains silent in this regard. In time charters, the position is relatively straightforward (although not deprived of exceptions). Where there are no express terms to safety contained in the contract, the court may imply one [1]. The twist however came with The A.P.J. Priti [2], where the Court of Appeal considered whether a safe berth warranty should be impliedly extended to a safe port warranty and found that it should not [3]. In any event, the court will not imply a term as to safety, unless it takes the view that this is necessary to give business efficacy to the charter.

In voyage charters, the position is much less straightforward. In The Stork [4] the charter provided for “approved” loading ports; Morris L.J. found that “there is an implied term in the contract that the charterers will in fact order or direct the ship to the place where she would find the cargo to be loaded, together with an express or implied term that the place to which the ship would be directed would be safe.” (p. 372). In The Reborn [5] on the other hand, it was found that the test should be one of necessity; in simple terms, the judges concluded that whether a port safety warranty will be implied depends on the degree (and range) of liberty that the charterer has to nominate ports and the information provided to the owners about the intended port of call. The greater the liberty, the greater the need for implication of the warranty, whereas the more extensive the information the owner receives, the lesser the need becomes [6].

Moral of the story

In the words of Samuel Johnson “he is no wise man who will quit a certainty for an uncertainty”. The issue of the ports’/berths’ safety warranty is far too important to be left to be decided by the coin-toss of a trial and terms should thus be expressly agreed upon. So let’s play it safe.