The ecological transition, the digital revolution, a new socio-political context and the crisis caused by the coronavirus have all led to significant changes that ultimately transformed the playground for the world’s ports. To remain key players, they now need to be able to seize the momentum and turn challenges into opportunities. But what are these challenges and how can they be tackled? Jordi Torrent, head of strategy at the Port of Barcelona, analyses the results of ‘Europe’s ports at the crossroads of transitions’, a report by Deloitte and the European Sea Ports Organization (ESPO).

THE TRENDS THAT STEER THE WORLD

‘Europe’s ports at the crossroads of transitions’, a Deloitte and European Sea Ports Organization (ESPO) report, explores the changing environment in which European ports operate, aiming to identify solutions that can mark their progress. Many of its conclusions are intertwined with those proposed in the ‘IV Strategic Plan of the Port of Barcelona’.

The report lays out four major dimensions that have a significant impact on today’s ports. In order of relevance, these are the green transition, the digital revolution, geopolitical context, and demographic trends.

66 per cent of the interviewed port authorities consider that sustainability is the trend that has the greatest impact on their port. The threat of climate change and the need to adopt more sustainable systems have made the green transition a priority in their decision-making processes.

“Ports must join the battle against climate change and air and water pollution —this has to be part of our goal— while keeping in mind our main mission: to improve the competitiveness of our clients,” explains Jordi Torrent, strategy chief of the Port of Barcelona. “To achieve this, we have to offer increasingly sustainable and efficient services and infrastructures.”

The threat of climate change and the need to adopt more sustainable systems have made the green transition a priority in the port authorities decision-making processes.

4 MAIN OBJECTIVES IN ENVIRONMENTAL MATTERS OF THE PORT OF BARCELONA

The Port of Barcelona has set four main strategic objectives in environmental matters.

According to the Deloitte and ESPO report, a sharp commitment to circular economy, clean energies and sustainable transport can position ports as leading agents of the green revolution.

Investing in innovation means to attract talent. In a city like Barcelona, ​​with a very powerful start-up ecosystem and a wide range of innovation clusters, this is a chance that cannot be missed. 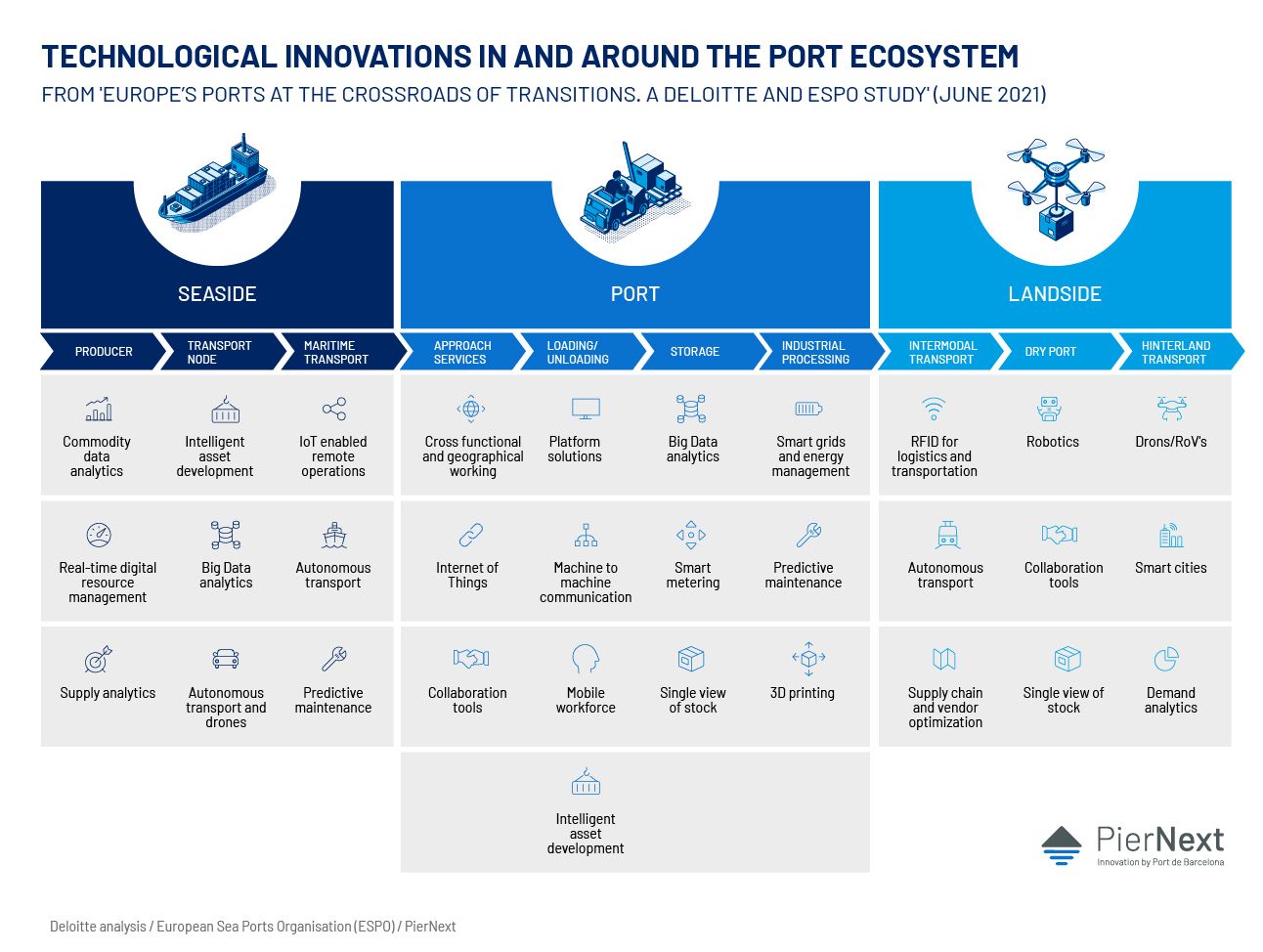 THE POWER OF DIGITISATION

Several disruptive technologies have transformed the global business scene over the past few years. Many of them are common in today’s ports: IoT, big data or blockchain are some examples. Others, like those behind autonomous vehicles, promise to transform port operations soon.

The report suggests that new technologies will not only shift port activities but also the way port authorities work. The planning and organization of actions, for instance, will be optimised through artificial intelligence. Digital twins, on the other hand, are a solution for mapping the impacts of activities.

“It is important to note that technology is not an end in itself, but a means to achieve our goals,” says Torrent. “Innovation allows you to differentiate yourself from the competition and continue to increase the competitiveness of services.” As reflected in its IV Strategic Plan, the Port of Barcelona’s mission is based on “being the first, the bravest and the strongest when it comes to implementing innovations”.

Besides, Torrent sees the “Innovation calls for talent, and talent generates more innovation – the two feeding one another,” says the Port of Barcelona’s chief strategy officer.

A WORLD IN CONSTANT CHANGE

Geopolitical transformations and new demographic trends will also do their bit in shaping the near future of the port sector. Trade liberalisation strengthened in the eighties has in the last decades favoured a pronounced growth of international trade, maritime transport, and port traffic.

However, the situation has changed in recent years, the report points out.  “The West has ceased to be the clear leader of the world, favouring the Far East. Meanwhile, other areas in Asia and Africa (Gulf of Guinea) stand out with force too. I don’t think we will ever experience the double-digit growth in European maritime trade and port traffic, fuelled by globalization, world trade liberalization and, especially, the incorporation of China into the global economy, that we experienced from 1980 to 2008″, according to Torrent.

Geopolitical transformations and new demographic trends will also do their bit in shaping the near future of the port sector.

For European ports, the economic stagnation of their hinterlands, climate change, proximity to conflict zones, the instability of some markets and a particular socio-political context mark important challenges. In addition, the gambling table threatens to change: it seems that in the coming years new shipping routes, such as the Arctic and the Cape of Good Hope, will open, and that economic and demographic growth will mainly take place in far off places.

This is likely to make ports pay more attention to security and planning systems and to consider more flexibility in their operations. In short, they need to be ready to adapt to a changing environment.

“In a globalized and increasingly interconnected world, disruptions are a very important and frequent element. What happens at one end of the planet has direct implications on what happens to us here. COVID-19, cyberattacks, the Ever Given’s blockage of the Suez Canal and natural disasters have all made this clear,” Torrent says.

THE NEW ROLES OF EUROPEAN PORTS

In the coming years, European ports need to develop new roles to establish themselves as agents of change, achieve their objectives, and successfully serve their customers. This is one of the key conclusions of the Deloitte and ESPO report. Ports’ importance at a public level is increasing, which presents an interesting opportunity for growth.

“The commitment and responsibility of ports concerning cities and citizens is rising,” agrees Torrent. “They used to be able to live as independent entities, free from the influence of their environment – but this is no longer the case. The integration of ports such as the Port of Barcelona in the city is becoming more and more important.”

“Ports used to be able to live as independent entities, free from the influence of their environment – but this is no longer the case. The integration of ports such as the Port of Barcelona in the city is becoming more and more important”, points Torrent.

This affects the way people in the sector communicate and make decisions, areas where collaboration is crucial. “A word that we use much in the sector is ‘coopetition’ – from cooperation and competition. It is important to collaborate with the closest ports and, on occasions, the more distant ones, too, even if we’re competitors,” he reflects.

“We can for example learn from what other ports, such as Los Angeles or Vancouver, have done in terms of dock electrification, and collaborate with the Port of Valencia in the implementation of common solutions. We seek to take advantage of the knowledge and experience of others while respecting the fact that they’re competition, especially between private operators working across ports,” Torrent concludes.

‘Coopetition’ at the Port of Barcelona is essential on many fronts – among them, leading the energy and sustainability transition and serving an increasingly wide market without forgetting, at any time, about its main purpose: to guarantee competitiveness for its customers.