On Tuesday 22 June the container terminal DP World TIS Pivdennyi solemnly met the first container train from China’s southern province Guangdong to Odessa Region the dispatch of which had been provided by the Ukrainian logistic company Uni-Laman Group.

As per the company’s Press Office, the train had departed on 29 May and entered the terminal on 19 June, making therefore the whole distance in 22 days. The train passed the territories of China, Mongolia, Russia, and Ukraine through four customs checkpoints, having covered 8,408 km all in all.

According to this report, the train has delivered 50 containers with furniture, electric appliances, and other goods. 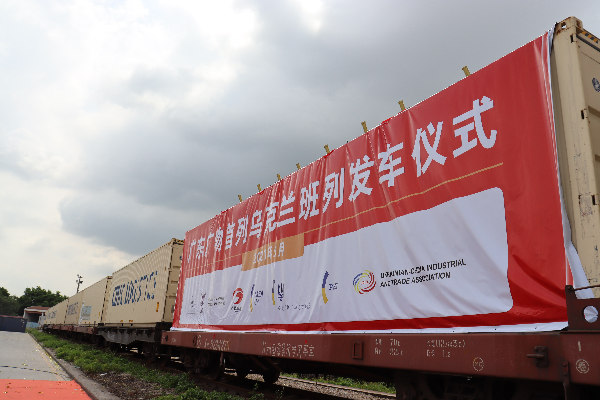 The train is marked as regular. This means that it will shuttle by a permanent schedule which is entered into the China People’s Republic railway schedule, no delays or mistakes. As of today, such a status for a train shuttling between China and Ukraine, is unique.

The preparation took above three months. Uni-Laman Group came as the Ukraine side operator of the train, and the Chinese side is covered by Guangdong GW Railway Operator Ltd being a part of the public corporation Guangdong GW Holdings Group Co., Ltd. Also CIMC-logistic came as a local agent in China. The train’s arrival and handling in Ukraine will be provided at the terminal DP World TIS Pivdennyi, which is a modern container complex operating well-developed railway capacities of its own.

“This train is going to help businesses receive goods from Guangdong as well as other southern provinces of China twice faster as the same destination delivery by sea. As soon as already today we can see a big demand for this itinerary, so we don’t want to lie on oars and will turn our efforts to the further fruitful cooperation with China in order to expand the goods turnover between our countries. By the end of the year we plan to increase the trains number to 10 monthly, and to launch regular traffic from other provinces of China”, noted Uni-Laman Group chairman of the board Gennadiy Sorochinsky. As specified by Press Office, the train’s travel time will be shortened down to 20 days in average, and the one-train shipment is planned as 50 boxes.

“The first box train from Guangzhou is a significant event for us. Our participation in this project fully complies with the DP World’s modern global marketing strategy. Our terminal selected to admit a train from China was not by chance, and mainly due to the advanced railway infrastructure of TIS”, noted Director of DP World TIS Pivdennyi Igor Zhigora.