The Swedish ports Gävle and Norrköping are interested to become the final point of intermodal route connecting the Black and Baltic Seas. This was made public during the webinar Black Sea to Baltic by the Port of Gdansk last week.

According to VP of Finance at Port of Gdansk Slawomir Michalewski, the port shows stable growth for the recent years. It occupies a position of top four major Baltic ports and is the second by the containers handling in the Baltic Sea. In 2020 Port of Gdansk processed 48M t of cargo, and is going to raise it to 60M a year.

Mr Michalewski has noted that the fact that traffic between Poland and Ukraine has grown significantly between 2018-2020. That is why Gdansk has intensified investments in upgrading its railway system, by constructing eighty kilometres of new tracks and upgrading three cargo stations. The same applies to the whole Polish railway system and the border crossings Medyka and Dorohusk, which are ready to handle the increased capacities and traffic. In general, as Michalewski concluded, “access to the port is already ready, we just expect our Ukrainian counterparts to take action”.

Consequently, links between the two areas of interest already exist. On the other hand, short-sea connections between say, Turkey and Ukrainian ports, also operate regularly. As Aleksey Panasiuk from the Ukrainian Sea Ports Authority (USPA) underlined, it is a concrete strategy of USPA to attract cargo flows to Ukrainian ports, and Turkey seems to have a central role in this sense. The Eastern Mediterranean country is growing rapidly and aims to become a central hub for Eurasian transport. Its role will be crucial for establishing the intermodal connection between the Black Sea and Baltic. Depending on its production rates and expansion views, it could become a prominent player in the project. 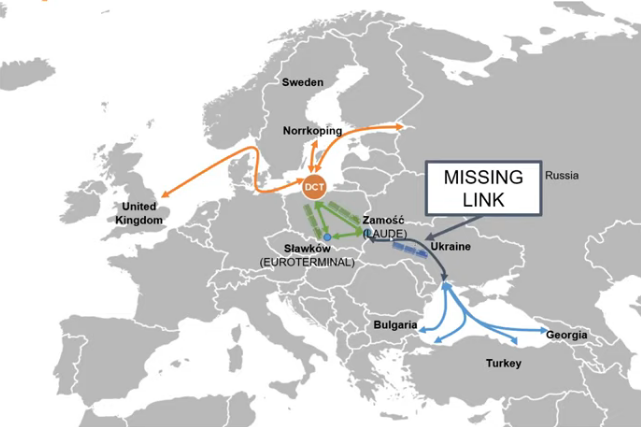 What is missing then for the whole plan to take flesh and bones? Dominic Landa, Commercial director of DCT Gdansk, defined the missing link as Ukraine’s railway system. In particular, infrastructure in Poland is ready, sea connections in the Black Sea exist, and the same goes for interconnectivity between Baltic ports. The project only needs the essential rail links between Ukrainian ports and Poland to be fully functional. Maybe this could be a potential barrier in the realisation of the plans. However, a smaller scale example proves that the project could indeed be successful.

There were as well the representatives of two Swedish ports, namely Gävle and Norrköping. They supported the idea of a potential corridor between the two seas and its extension further to the Scandinavian states. Moreover, they expressed the wish to join the corridor and claimed that their two ports could come the end points in it inasmuch as they could offer a lot both as concerns the export and the import.

The situation so far, and according to the online gathering, seems promising enough, with all parties concerned ready to take the next step in implementing the initial plans. The intermodal transport sector will probably learn about the project’s future soon enough, after resolving hurdles concerning the Ukrainian rail leg of the corridor to be.